The Ace Attorney series is for the Nintendo DS. It’s a point and click style series produced by Capcom. These games are fun, engaging and full of great story. The series mainly follows one protagonist by the name of Phoenix Wright. The first three games follow his journey solely. The two games after that star two other characters “Apollo Justice” and “Miles Edgeworth”. Though these two games star a different protagonist the game still anchors on Phoenix has a driving force behind the series. These games are very fun and thought provoking. If you’re a point and click adventure fan this game series is a must.

The story of the series is about an Attorney who solves murders while defending your Client from getting a guilty verdict in court. The first three games focus on a young attorney named Phoenix Wright. People like to refer to these three games as the “Phoenix Trilogy”. The next game takes on a new protagonist named “Apollo Justice” who is Phoenix’s apprentice seven years later after the first trilogy ends. The last game in the series takes a different approach and it focuses on “Miles Edgeworth” Who is a prosecutor instead of a defense attorney and focuses on a different style of game play. The story of each game focuses on each protagonist as they work their jobs as attorneys solving Murder cases. Their back stories and personal relationships are fleshed out throughout the series. The story for each murder is very well written. It’s is extremely engaging game that draws you in, and it keeps you in suspense until the very end. The Writing is humorous, riveting and full of unpredictable plot twists that makes this game a pleasure to play. The story and characters are a big reason this game has developed a cult following in the gaming community. 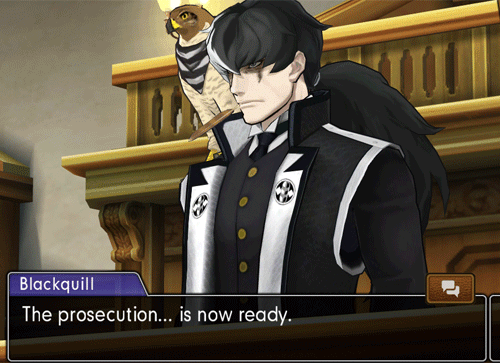 The game play in this series is mostly point and click based. There are two different types of game play in each game of the series (Miles Edgeworth’s game strays a little from the formula but I’ll talk about that later). The first type of game play is the Investigation. In the Investigation portion of the game play you are searching for clues, and getting information from witnesses and law enforcement involved in the crime to build a case for your client. You move from place to place picking up clues and getting information to solve the case. It’s a standard point and click type scenario for this part in the game. You have a cursor which you can point at things that stick out to you and you interact with them to get more information. When you getting testimony and information from characters related to the case you talk to them and ask them questions to get more information for the trial. You can present evidence and ask questions to draw more information out from each character. Once you have all your evidence and information you need you move on to the trial portion of the game.

The trial portion of the game play is where the game gets suspenseful. In this portion of the game you “Cross examine” Witnesses to try and find “Contradictions” in their testimony with the facts of the case or the evidence you hold in your inventory. You can press the witnesses during their testimony to draw out more information so you can find the contradictions in their story. You use your arsenal of evidence to show to the court that your client is innocent and point the law to the real criminal. If you present the wrong evidence in court you lose a portion of your life bar. If your life bar is depleted you lose the trial and your client gets found guilty. It’s very fun and thought provoking. The games story also builds great suspense during this portion of the game and it can get very riveting. There are times when the logic for what evidence needs to be shown at certain points in the game can be very illogical and unclear. The evidence they want just doesn’t make any sense to the information provided until after you present it, and it can be a little annoying.

For the game Ace Attorney Investigations: Miles Edgeworth it takes a slightly different approach. The game focuses completely on the investigation portion. As a prosecutor you’ll investigate a crime scene with a moveable spite that can interact with the object in the room instead of the usual point and click interface in the previous games. They also added a logic feature into this game. Where you get small pieces of information and you can connect them to unlock new information about the investigation. It does use the point and click interface but it’s used sparingly and it focuses more on interaction with your character. You can also talk with other characters at the scene to get more information about the case. The game has also added a Testimony like portion as well. Though mostly it’s having a battle of wits with other investigators about what really happened at the crime scene and using the evidence you have gathered to prove they are wrong with their assumptions to what actually happened. It’s nearly identical to the testimony portion of the previous games where you must find “contradictions” with the facts. It’s just used in a different context. These games are very fun. Replay is kinda low but if you give the games time away they are always fun to play again on much later dates. 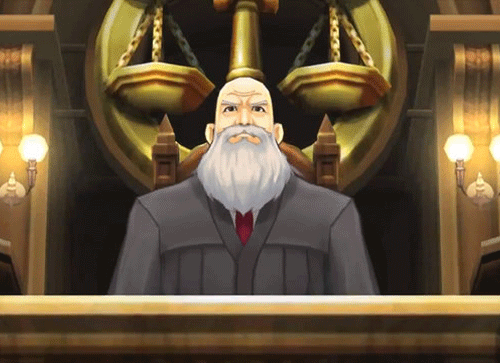 The music in the Ace Attorney series is awesome. The tracks are catchy, memorable and used to well to capture the emotion and feeling behind each scene and character. The song “Cornered” is very suspenseful and it helps increase the intensity of a trial. There are other songs that reflect emotion of certain scenes like in the song “Reminiscence – what the others have seen” which has a sad melodic sounds to it, or in the song “Cammy Meele – Good Niiight” which is quirky and a little silly. The music in the game is great and it’s enjoyable to listen to. My personal favorite track is “The fragrance of dark coffee”. The track has a film noir sort of feel to it and is very cool sounding. This track is one of my all time favorite video game songs.

This game has great graphics. There are some decent semi FMV sequences before each case which are nice to watch before you get into the meat of each chapter. The backgrounds and the characters are very well detailed. Each character has a great deal of personality and they each have a wide range of expression and emotions that they express throughout the game. The Graphics in the game are very good though they are not very animated they are very detailed and good looking.

The Ace Attorney series is a great point and click style series of games. If you are a fan of this genre of games it is a must have. The story is very deep and the humor is good. It covers each range of the emotional spectrum in the story telling, and the game will draw you in and keep you playing until the end. I love this series and I have played through it twice. These games are a great addition to any DS collection. If you’re looking for a great point and click game with a strong storyline that makes you think and will keep you on the edge of your seat this is the game for you. I give this series a 9 out of 10. It’s got limited replay value but it’s always a great series to come back to after ample time has passed.