I remember the excitement I felt when this game first came out, it was the very first game I ever got for the PS3, and it was the newest GTA game to come out since San Andreas. Back then, when I first got my copy of GTA4, it was wonderful and exciting, the game play was top notch and I was drawn in by the glorious graphical capability of my brand new PS3.

I have to say that the story is great, even a little touching at times, serious and dark at others, and some times it a Michael Bay wet dream. Mr. Bellic pretty much just spends the whole game looking for work and revenge. I could also go on about his annoying comic relief cousin, but by now most people already know what an annoying dummy he already is.

Since my first play through of GTA4 in 2008, I’ve had the chance to play other sandbox games like Mercenaries 2 and Infamous, and now coming back to GTA4 feels sort of masochistic. It has this all too real feeling in a way, and that’s not necessarily the most exciting feeling for a game to offer. Falling down happens too easily and it takes way too long to get back up, and it’s impossible to climb over or on most of the things you encounter. I personally can climb a fucking chain link fence without too much problem and I’m sure if I did it a few times it wouldn’t cause me any problems at all, so why the fuck can’t Nico Bellic climb a chain link fence unless it’s a only under a certain height? Also, I know for a fact that I could get back to my feet quicker than he can, and if I were to bump up against a car it wouldn’t knock me over and cause me damage. 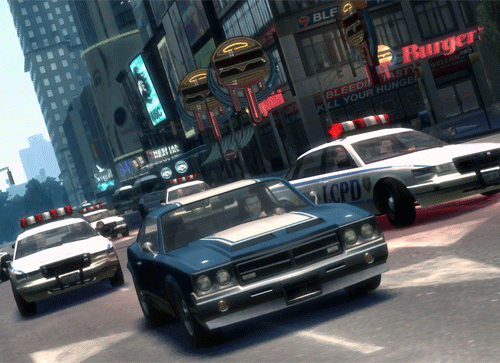 I’m starting to get the impression that I could do a better job at everything in GTA4 than Mr. Bellic with the exception of flying a helicopter. But I am just assuming that it’s hard to do, I’ve never tried it though. I can also aim better than Mr. Bellic and move faster, even while shooting a rifle. Mr. Bellic is a damn war vet and I only have meager training and I possess no combat experience in the least. Maybe I should go all the way and try this GTA thing for myself? Because this game is making me believe that I could do quite well shooting up a city and getting away with it.

Okay okay, well maybe I’m just tired of the game. I did get 100% completion on it on my first play through and I did it again after the PSN enabled trophies for the game. I’ve experienced every little thing in the game a million times and at this point it’s all just overplayed to me.

So the game does have that to say for it; an arbitrary trophy system might inspire you to replay the game in it’s entirety. I also do have to admit that I’m actually looking forward to my roommate finally playing it so I can get the chance to play it a little more :/ But that said, and now that I think about it a little more… there are sand box games with better controls (like Infamous) and some of them have much better stories (like Infamous) and are a great deal more fun to play (like Infamous). But the guys at Rockstar do know how to make good video games, generally… and this game will consume a fair amount of hours once started.

The multiplayer is… well… it needs… um… a great deal of work. GTA4’s multiplayer is at best an experiment at what might be possible some day for a multiplayer experience in a GTA game in the future, but it’s seriously not ready yet. The feeling is total chaos and it’s pretty damn annoying to play a game against other people with it’s stupid lock on aiming. I had a little fun in the co-op games and got in a groove for a while, but over all, GTA4 is not a game that any one will play for the multiplayer. At best you might try it out for a couple of minutes here or there, and at best you will only be mildly disappointed.

The Lost and Damned DLC:

The GTA4 expansions really are worth it. They don’t really offer any new environment changes or additions, but they do take advantage of the existing GTA4 map and they add hours of fun new game play.

The story in this one is about some internal conflicts with in a bike gang, and you have to deal with your wreck of an ex through out the game. But it’s pretty much the same old GTA4, but you play as a new guy and you have new missions and some new music on the radio (mainly metal). Some of it actually isn’t half bad.

The Ballad of Gay Tony DLC:

GTA4 is a game that just wouldn’t die. After all of the time I spent with GTA4 I was surprised to find myself still very entertained by what these expansions had to offer.

In this one you are an ex con who got hired by a club owner, who pretty much relies on you to do every thing important for him. You have to help him sort out his financial problems which leads to you having to shoot down waves of gangsters from time to time. This expansion also offers lots of fun missions, some good helicopter ones and club shoot outs that would make P. Diddy envious.