Lords of Thunder is a must play horizontally scrolling shoot-em-up or shmup. If nothing else it should be experienced solely for the infinitely excellent soundtrack, which consists of Yngwie Malmsteen style neo-classical shredding. The composer credited as “Groove King” is Satoshi Miyashita, one of the many unsung heroes of video game music composition. The version I am reviewing is its initial iteration for the PC-Engine CD. For those of you that are unfamiliar with NEC’s family of consoles the PC-Engine is what was known as the TurboGrafx-16 here in the states. It was marketed as the first 16-bit console but in fact had two 8-bit processors, which gave it a serious advantage over the NES and Master System but it couldn’t compete with true 16-bit processing such as with the SNES or Genesis.

The cartridges for the console are rather interesting appearing less like a cart and more like a credit card, they were called HuCards. A year after the Turbo’s release NEC released a CD add on for the Turbo making it the first CD console. Finally a year after the CD units release NEC released a console with both units already together dubbed the Turbo Duo, or PC-Engine Duo. I could go on, but I digress.

There are two ports of Lords of Thunder, one for the Sega CD (being one of the few good games for it), and a release on the Wii’s virtual console. So if you own a Wii, I highly recommend this title!

In Lords of Thunder (LOT for future reference) you have your choice between 4 different Elemental Armors for your character to utilize all with pros and cons. Like most shmups you can power up your regular shot, in LOT there are 3 tiers of power for your regular shot.

Wind: Decent 5-Way shot when fully powered, kind of weak. The bomb attack is a storm of lightning which easily hits all targets on screen.

Water: Absolutely the most advantageous shot with two beams in front of you and two behind, you basically cover the entire screen while firing from the middle of it, because of this advantage it is weak. The bombs attack is a spherical water attack that bursts out of the player expanding off the screen.

Fire: When fully powered its basically a short range flamethrower that moves up and down when you move, decently powerful. The bomb attack summons a flaming dragon that homes in on enemies on screen.

Earth: Fully powered it shoots two bombs arcing out in front of you that explode into vertical columns that rush forward pretty much annihilating anything stupid enough to be in the way, absolutely the most powerful armor. When in doubt, pick Earth. The bomb attack summons a meteor shower.

In addition to your regular shot and bombs you have a rapidly slashing sword attack when you fly close to enemies, very powerful and worth exploiting at every opportunity. 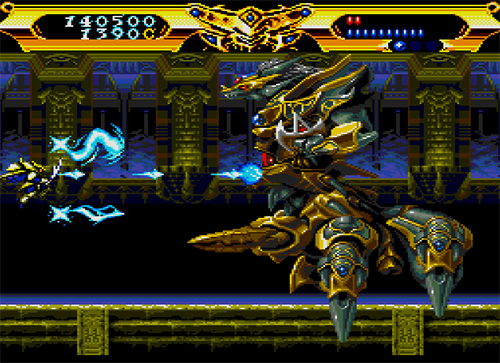 There are six stages to progress through before the final stages. Before you start each stage you go to a shop where you can buy various power-up items which comes in real handy. Currency for the shop is picked up from slain enemies as floating gems. You can play them in any order but it seems easiest to follow the clockwise path where the game starts you. You could go through and find out what armor would be the most advantageous for each stage, but like I said Earth will pretty much clean house every time.

If you care about the story (not sure why you would for a shmup) it’s something generic along the lines of: You are a badass who has to save the day from bad folks doing bad folk stuff, like resurrecting some bad guy. Anyway the enemies in LOT range from monsters, to mechs, to dragon-knights so there is pretty good variation and not a lot of cheesy palette swapping. At the end of each stage you get to see the boss transform from a tiny human sprite into a massive monster, all of which look pretty cool. They make a hilarious sound when slain, like a pitch-shifted demon gargling blood…or something like that.

After you beat the initial six stages you have two more, the last being only the final boss fight with no stage to progress through. The final boss has three forms: first he’s a human casting spells and what not, then he turns into a boomerang-axe wielding demon, and finally a giant demon head. On the games normal difficulty it should be relatively easy for anyone familiar to the genre, and very beatable after a few plays. The games hardest mode, dubbed Super, is a real pain. Nearly every enemy is shooting, and the icing on the “Super” cake is that when you kill an enemy they spawn a death-bullet. The stronger the enemy, the more death-bullets spawned.

Lords of Thunder is yet another excellent game that went under the radar due to being released on unpopular consoles, but is now easily attainable and should be experienced by anyone who enjoys shmups.