Mr. Gimmick is a game that I was unaware of until just recently. I was introduced to the game through Pat The NES Punk. His review caught my attention, and sold me on the game immediately. Mr. Gimmick is an unreleased game slated for the NES in 1993 by Sunsoft. At the last minute the game was scraped and it never saw the light of day in the US Market. The games prototype for the NTSC region was found and dumped onto a playable cart available at Retrousb.com. This game was very ambitious and offers a lot to any gamer. Its a shame that it was never officially released State side. 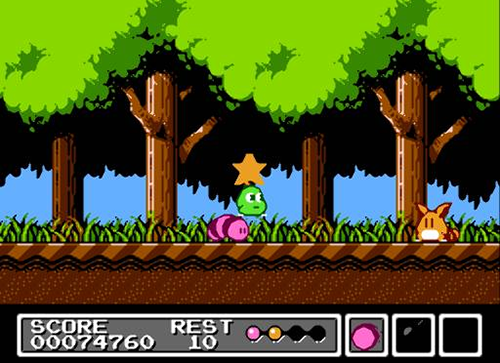 The game play in Mr. Gimmick is rock solid. The game is an action platformer that uses a realistic physics engine to move both Mr. Gimmick and his weapon in the game. Mr. Gimmick has weight to his little body and he moves based on momentum. He walks before he runs, he slides down hills and slopes, and his jump height is based on the speed and momentum he is moving at. His weapon also works in the same sort of way. He shoots a shooting star from the horn on his head. The star when thrown will bounce around depending on the angle and trajectory it was thrown. Mr. Gimmick can also jump on to the star and use it as a mode of transportation or as a boost to help him reach high places. This physics engine works wonderfully with the game and being able to manipulate your star attacks to solve puzzles and kill enemies is very satisfying.

The next thing about the game play is its difficulty. This game is pretty hard. Though its not impossible to beat but there are a few things about this game that make it very difficult. The AI in this game is very good. The creatures and bosses in the game are not simple, they are relentless and they are tricky to deal with at times. Bosses are known to lure you into bad spots and attack you when you are vulnerable. Some bosses can be very hard to hit and kill because of how well they maneuver and react to your actions.

The game comes with unlimited continues which is good however there is a catch 22 to using them. In Mr. Gimmick there are two different endings. A Good ending and a bad ending (sorta like Bubble Bobble). The last stage in the game stage 7 can only be unlocked and played through if you meet certain criteria. This is where the game gets hard. To get the good ending in the game you have to find six very well hidden special items in each stage before you get to stage seven. You also need to beat all six stages before the last without using any continues. If you fail to meet either of these requirements you cannot unlock the final stage and get the good ending. With the AI in this game it is a very difficult task. Its not impossible but it will take time to acquire the skill to be able to save the girl and get the good ending. 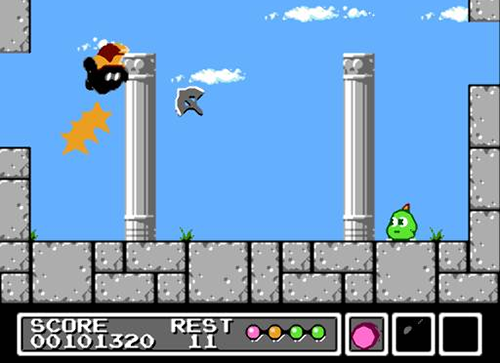 The music in Mr. Gimmick is awesome. Its some of the best music of the 8-bit era. The tracks are catchy and they represent each stage and environment perfectly. From what Im to understand Sunsoft added a special sound chip that gave the game a higher quality of sound for the music. Listening to the tracks of each stage youll notice that the music is very good. Its catchy, it fits the game like a glove. There is nothing about it that is repetitive or obnoxious. It exhibits the high quality music that Sunsoft was known for in the 8-bit era.

The graphics of Mr. Gimmick are also superb. They are extremely detailed and they look great. Some of the best graphics seen on the NES are on this game. The game is colorful and everything shows a high level of attention and care. The Sprites are very good looking. The animation cycles are smooth. They sprites also have a lot of personality and both enemies and Gimmick himself express clear expressions and emotions. The people at Sunsoft really put a lot of time into this game and it shows in every little detail in each stage in the game. The graphics in this game are of the highest standard. If you manage to find a little time to stop and take in the scenery youll be pleasantly surprised.

Everything about Mr. Gimmick is of the highest quality. Some of the best the NES has to offer is on this game. You can tell Sunsoft put a lot of heart into this game, and it shows in every aspect of it. The music that sets the tone for each portion of the game, the graphics that bring the characters and world to life, to the music that exquisitely sets the mood to each environment in the game. Mr. Gimmick is a game that should have become the Sunsoft champion. Its a shame that many gamers missed out on such a marvelous masterpiece this game is. Like Mother and Sweet home this game was kept from the US market, and the gamers of this country missed out on something great. I give this game a solid 10/10 Its a must play for any gamer.