Plants vs Zombies for PC

Plants vs Zombies is a really fun, novelty, tower defense game. It’s comical and silly, and is the type of game that would be fun for just about any one. But be warned, it can get a bit addictive.

It’s a fun casual game that can be entertaining for experienced gamers and beginners, and also serve as a good introduction to tower defense games. It has a nice gradual difficulty curve and shouldn’t be too difficult to play through, even for some one inexperienced with these kinds of games. While a more experienced player may be able to wizz through the story mode but still have a difficult time with a handful of the mini games and challenges.

The game is essentially about some zombies trying to eat your brains, and your only defense is a horde of super zombie killing plants that you grow. There is also a guy called “Crazy Dave” that you are introduced to early in the story mode who sells you bonus items from out of the back of his car. He’s a strange man to say the least… I guess he’s supposed to be some sort of comic relief character, but his antics are rather… meh… he’s just a stupid, annoying interruption. 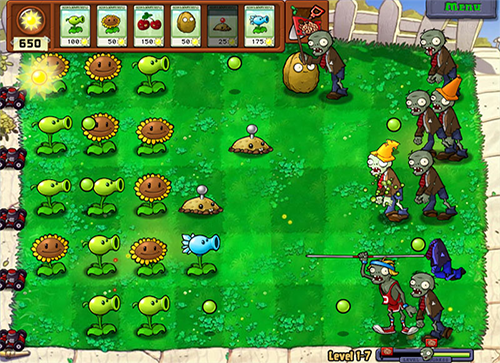 I’m a fan of tower defense games and when I stumbled upon this game I was pleasantly surprised at how fun it was. Instead of how in traditional defense games where the enemy travels down a linear path in which to get to your base, and you have to set up turrets along the sides of that path in order to ceace their on coming approach, instead in this game the enemy comes down either 5 or 6 rather short paths to get to you, and you have to set up turrets on every row to keep the enemy at bay. This threw me off at first, but once you get the feel for it, it’s actually quite easy to handle.

This game isn’t so much about quickly upgrading a small number of turrets as quickly as possible, as is normal practice in tower defense games, instead in Plants vs. Zombies you have to worry more about spreading your defenses out to protect all of your open lanes.

It has a pretty solid campaign mode which will take a bit of time to work through, but isn’t too hard. There are also puzzle and mini game modes which are quite fun, and serve as a more stimulating of challenge. It all has a pretty fair difficulty curve so it should never get frustrating or feel too easy. Over all it’s defiantly worth the money.

(I liked the game so much that I immediately bought the PS3 version when it came out on the PSN, even though I already had a copy for the PC.)

The console version of the game adds a few fun co-op modes, which aren’t in the original PC release, which allow two players to work together towards a common goal, and there is also a versus mode where one of the players can play as the zombies, which is a rather fun dynamic.

What It Could Do Without:

I have to say that the only part of this game that isn’t good is the stupid zen garden feature which really doesn’t seem to be necessary at all. It’s not an effective way to make money in the game, (which is it’s sole purpose) and it really isn’t a mini game or anything. I’m not really sure how to explain it because all you do is click stuff, and it’s boring as hell. But luckily you can completely avoid it and it’s not a central feature of the game.

But besides that the game is very solid and very enjoyable.