Secret of Mana for SNES

Secret of Mana this game holds a special place in my heart. It’s a game I grew up with and one I fondly remember playing multiple times with friends. I was a poor kid back in the early 90’s so I didn’t own very many games. The only time I really got to try games out was at the video rental store. Secret of Mana is a game I did own and since I had a limited number of games it’s a game I played through multiple times. I consider it to be in my top 10 favorite games, and it’s a game I’m always happy to revisit from time to time.

The story is about a boy who falls down a waterfall and finds a sword in a stone. The sword is a legendary sword that defeated the fearsome Mana Beast in the distant past. The removal of the sword will disrupt the balance of peace in the world and will reawaken the Mana Beast. The people of the village find out he has pulled the sword from its resting place and banish him from the town. The boy must take the sword and embark on a quest to reset order to the world, and defeat the Mana beast that has been resurrected. It’s a simple story with likeable characters, and a few plot twists to keep it interesting. 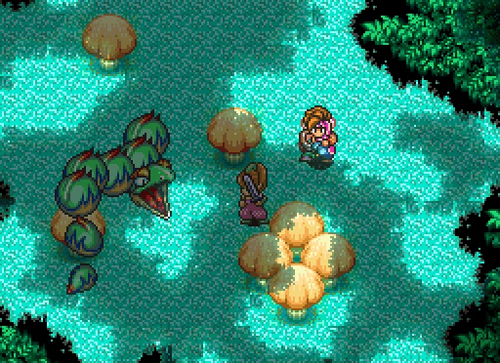 The game play is my favorite thing about this game. It’s an action RPG style game in a three quarters down perspective in the same vein as The Legend of Zelda or Illusion of Gaia. The thing that sets this game apart from other action RPGS is the fact that it can be played with up to 2 other players. You get different types of weapons and they can be switched between characters. There are also a mess of spells you can use both offensive and defensive. The thing I love is how solid and smooth the game plays. The characters move swiftly and the hit detection is spot on. The only thing I don’t like about the game play is in multiplayer when you go into the menu it pauses the game interrupting the flow of the game for the other players around you. It’s slightly annoying but it doesn’t hurt the fun factor this game offers in a multiplayer setting.

The music in Secret of Mana is amazing. The music I’d say is on par with some of the other greats like Final Fantasy or Chrono Trigger. The music is catchy, it sets the mood for each and every stage in the game and it’s memorable. I love the music in the game. It’s well composed and it’s got some of my favorite 16-bit tracks on it. There are no points in the game where the music is hurts your ears or is mind numbingly obnoxious. Some of my favorite tracks are Thanato’s Castle, Salamando and Tell a strange tale. 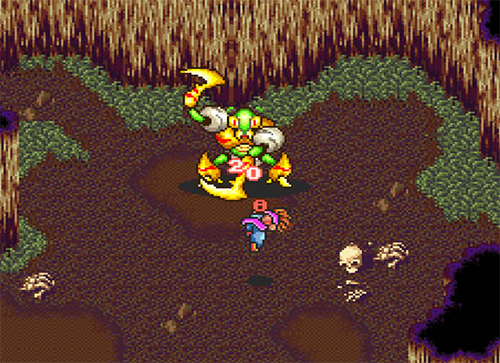 The graphics are another great thing about this game. They are very clear and vivid. The sprites are well detailed, and the movement cycle is fluid and smooth. The characters in the game look great. Everything looks like it should; you never have any problems telling things apart. The backgrounds are very detailed, and the monsters are as well. The monsters and characters in the game also have expressions. This game is one of the more visually impressive games on the system on par with Chrono Trigger.

Secret of Mana is a great game that is fun to play alone or with a friend. Being that it was made by Squaresoft the game exhibits the quality that the company is known for. Everything in the game was superbly made and it’s just as fun to play now as it was 20 years ago. If you haven’t played this game, and you’re into games like Zelda I definitely recommend giving this game a shot. If you can find a friend to join in on the fun it’s even better. It’s a solid game that still holds up over time. I give this game a 10/10. It’s a great game and the quality is top notch for a 16-bit game. It’s definitely one of the gems of the 16-bit era.