Atlas tends to be a hit and miss Production Company when it comes to video games, but Shin Megami Tensai: Strange Journey is in my opinion one of the best handheld games to come out in the last 5 years. It’s such a great game that I have dropped over 200 hours on it, and I have beaten it three times getting each ending. Like most Shin Megami Tensai games it’s a very deep game revolving around the occult and the summoning and interactions with demons and angels. Out of all the Shin Megami games I’ve played this one is my personal favorite. It’s like taking a D&D dungeon crawler game and fusing it with a Pokémon game. The game is a gem and it is a must play for any DS owner and RPG enthusiast.

The story of Strange Journey is about a growing inter-dimensional bubble growing in the Antarctic. This bubble or rift is growing in size and swallowing up everything it comes in contact with. The story begins with the world pooling its military forces together to send an elite team to go into the rift and find out how to stop it before it consumes the planet. Once the team enters the rift they find an altered dimensional reality which demons and angels are at war for the fate of mankind. You take control of a soldier who will have to fight his way through the rift to not only find a way out of it, but he will also have to choose the fate of the planet and all of mankind. It’s a very interesting story with multiple endings. Though the story is a bit slow and overly technical in the very beginning it’s a very captivating story dealing with some fairly dark subject matters. 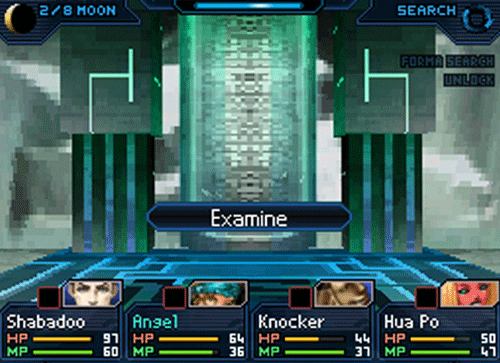 The game play is the best part of this game. The game play is solid from the battlefield and over world maps, to the character and creature customizations. The game is a turn based RPG with a first person dungeon crawler point of view for the map traversing. The character your given wears a special advanced suit of armor that can be upgraded and leveled as you play through the game. The suit can install and utilize software called “Apps” there are two different types of apps in the game. “Main apps” and “Sub apps”. Main apps are applications that are mandatory things like Door unlocking applications to a “Creature proximity app”. The sub apps are customizable applications that give you different bonuses in the game like recovering Hp as you walk or the ability to cut in half or turn off random battles. Apps are upgraded with a special type of item found in the game called Forma. It’s like a solid material found that is used to upgrade your suit and create Items and weapons with.

The next part of the game is the communication and collection of Demons and Angels. The game lets you converse and ally with different demons and angels you battle in the game. When you get into battle you can either fight or talk with the demon you’re battling. When talking with Demons you can ask them to join your party or have them give you items and money. When trying to get a demon to join you, you have to get them to like you. Each demon and angel has an alignment as does your main character. Your character can be Good, Neutral or Evil. When your character has the same alignment as the demon your speaking with it makes it easier to get them to like you making it easy to have them join you are give you items you need. If your alignment is not the same the demons will be harder to win over and they will be easy to anger. What you need to do when talking with demons is to try and say things to them that they will like to hear depending on the clues the give you when speaking with them. Each demon will ask you a series of questions and depending on your answers depends on whether they will be happy with you or angry with you. As you converse with demons and angels you start to collect them and you can store and summon them as you go.

It’s a lot like Pokémon in this aspect. Each demon in the game is an actual mythological creature or deity from different cultures from around the world. You can get a Japanese deity Amaturasu, or the Norse god Thor, to the Aztec god Quetzalcoatl. You can collect a very large variety or angels, demons, gods and deities. Another cool feature is being able to take 2 demons and fuse them together to create a new demon. As you collect demons you can take 2 in your party and fuse them together to create other demons. It’s very cool and fun to collect and fuse all of them. The battles are a standard turn based system. You’re given 3 demons to fight alongside you in battle. You can use Swords, Guns and Items. Your demons can use attacks and magic. It’s pretty standard and solid as a rock. It’s a common but fun style of game play. You get a lot of opportunities to customize you game, and with Multiple endings and a New game+ feature this game has a lot of replay value.

The music in the game is probably the weakest link. Though the music isn’t bad by any means it’s very subtle and doesn’t stand out at all. It has a very demonic sounding soundtrack. It uses a chorus and orchestral soundtrack. Though it sounds cool and adds to the atmosphere of the game, it’s just not the most memorable score I’ve ever heard. It’s used more for ambiance than anything else. It’s good it does its job well just don’t expect to remember it for very long after your done playing it. 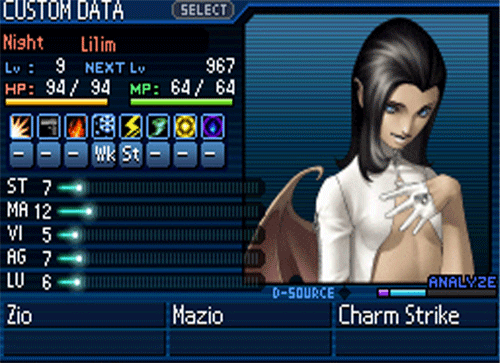 The Graphics are good. The creatures look great and the characters do as well. They have the artistic style that all Atlas games tend to have. Which is very Japanese anime influenced. There are a few FMV sequences in the game nothing to awe inspiring but they make for a good transition from sector to sector. The characters like in most DS games are not animated and it uses text to get the story out to you. It’s pretty standard stuff, and it’s definitely nothing to complain about. One interesting thing to note is some of the provocative imagery used for some of the demons and angels. In some cases a few demons straight have a Penis for a head. It’s pretty cool though, It’s like a grown-ups Pokémon.

Strange Journey is a fantastic game for the DS. It is a must play and I would recommending it to anyone. It’s got a lot of great game play with bonus side quests and customizations to keep you playing for hours and hours on end. I’d call this game a masterpiece. It’s so well made and I can’t praise this game enough. If you’re a fan of the other Shin Megami Tensai games, Atlus games, or RPG’s in general you owe it to yourself to check it out. It’s a Gem in the DS library and it’s a game that I’m always happy to come back to no matter how many times I have beaten it. I give this game a solid 10 out of 10.