Sweet home is Capcom’s 8-bit Resident Evil. The game in actuality has nothing to do with the story line of Resident Evil. The game is actually about a film crew made up of five different people going into a haunted mansion to do a report and restoration of a famous artist’s frescoes. The game is based off of the Japanese Horror Film of the same name. Capcom did however use many of the ideas and concepts that were featured in this game and used them in Resident Evil (Door opening load screen, Characters trapped in a mansion, and a lot of the puzzles in the game.). Many consider Sweet home to be the first survival horror game considering you’re only given a handful of items and each character can be killed permanently.

The Story is about a film crew doing a documentary on a local artist and his frescoes he created in his mansion. They go into the mansion and get trapped by the spirit of the artist’s wife “Lady Mamiya”. The story revolves around the crew trying to escape the mansion, it’s also about how Lady Mamiya became the vengeful spirit she has become through a tragedy that happened to her and her baby. The game really doesn’t tell you much about the story until you meet up with the character Ken’ichi Yamamura; a mysterious old man who knows the history of the mansion. If you plan on playing this game I’d recommend watching the Japanese Film the game is based on. It will give you information that has been omitted in the game. 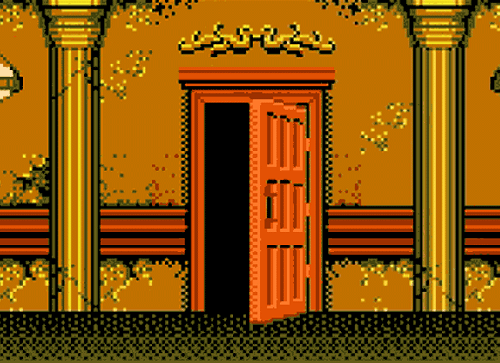 This game is a RPG style game. You explore the mansion in an overhead style view like most RPG’s of the time (Final fantasy, Zelda and Dragon quest). You are only allowed to have 3 members in a party at any given time. You switch between parties and place each character in any party you like at anytime. This game also has a Survival horror aspect to it. If a character dies in the game the character cannot be revived. Every character is given a unique Item that they can use to get through different barriers in the game. If a character should die you can pick up an item that can do what the characters unique item can do. Other then the unique item each character has they can only hold two items. You’ll find yourself picking up and dropping items frequently in the game to solve puzzles and to heal yourself with. The battle system is a standard turn based battle screen. The battle menu has four different options in it. Attack, Pray (Sort of like magic in any other rpg game.), Item and Run. There are a limited number of health potions in the game so you have to play very conservatively so you won’t end up dying later on because of a lack of healing items.

The Music is actually very good for its time. It has a very gloomy and eerie sound to it. It does a good job setting the mood and is quite memorable. They try to use sound to give the game a scare factor. Like when the battle screen starts it plays a short anticipation sound then it makes a screeching scream like sound when the monster appears to try and scare you. For an 8-bit game there really isn’t much to work with in making you jump, but it you have to give it credit for how they tried to add a jump factor into the game by using sound. The game did a great job with the music and sounds. It works perfectly for the game. 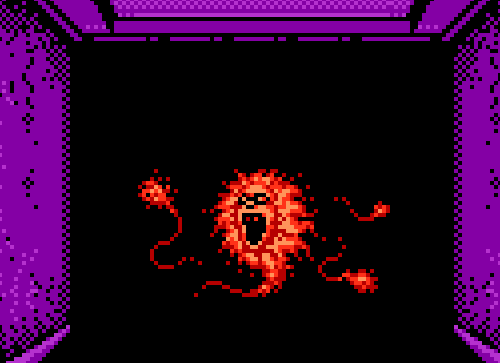 Over all this game is an underrated gem and it was a shame that it was never ported from the Famicom to the NES. I believe Nintendo didn’t want to port the game over because of its religious references such as the Pray ability and the gruesome gore that was depicted within the game. You can find roms of the game, and there are also bootleg cartridges that have been translated so you can play this obscurity. If you do play the game watch the Japanese Film that it was based on. It gives you a little more idea of what’s happening throughout the first half of the game and it is fun to compare the two to see how well the game stays true to the source material. Check it out you won’t be disappointed. I give this game 9 out of 10.