Movies made into video games. Most of the time making a video game adaptation made out of a film usually ends with a bad game. Over time it becomes an expectation that a game made after a movie is usually a waste of money. You end up finding yourself avoiding these games at all costs just because the odds of them being any good are approximately 3,720 to 1. Sometimes however they’re movie adaptations that come around that actually turn out to be good. Willow happens to be one of those games. Willow is often over looked and it’s an under rated game in the NES library.

The game Willow is loosely based off of the film. You’re Willow a Nelwyn farmer who finds a baby and has to protect her from the evil queen Bavmorda. Along the way you get help from an expert Swordsman, a great Sorceress, Fairies, Brownies and other various characters along the way. The game does take a lot of liberties with the story. It adds other scenarios into the game to increase the length. It however stays true to the basic plot of the film and though it does stop to take a quick detour from the main story arch; Willows story is interesting and holds your attention well. 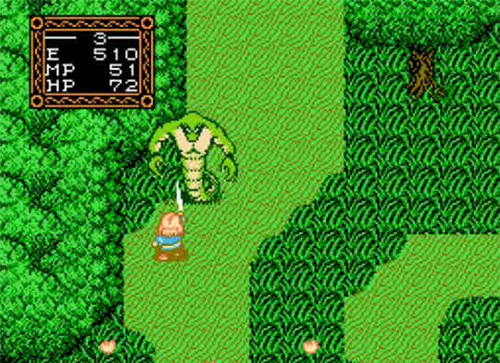 Willow is an over head action RPG style game, reminiscent of Zelda. You move will from screen to screen, and fight enemies as they appear using your trusty Sword, Shield and Magic items. The game play is very solid. You can jab the sword forward or swing it in front of you. If you face projectiles and certain attacks without pressing any buttons your shield deflects them.You also get different magic’s and items to help you along the way. Whenever Willow gets a new sword he swings it rather slow, because he’s not used to using the new weapon. Over time the more you use the weapon the faster he can swing. Unlike Zelda, Willow uses a leveling system, and he gets his strength by gathering experience. The only big gripe I have about this game is it does not utilize a battery pack save feature. The game uses a password system that is not only long, but it uses both upper and lower case letters which can make putting in the password very tedious.

The Music in Willow is probably one of its weaker points. Though it is good there are a few tunes that hit a higher pitch that can bother your ears (The Intro song and Town Music specifically). The music in general isn’t that bad. At some points it’s pretty good. The high pitch is a recurring problem which can be hard on the ears. The music doesn’t leave as much of a lasting impression like Mario, Zelda or Castlevania. It’s a mixed bag some aspect of it is good and some not so much.

The graphics in Willow are pretty good. The sprites are rendered well and everything looks like it’s supposed to. You don’t have problems telling things apart and the colors are appropriate for the setting of each area of the game. The monsters though generic at times look good and are animated well. There is also a separate dialog screen which shows an image of the character you’re talking to. The graphics in Willow is definitely one of this game’s stronger points.

Willow is a under rated game from the NES library. Being a film adaptation is a curse of its own which led it to be over looked by many. The game is solid and it is very fun. The game isn’t without its flaws. But the flaws are minor and the overall game makes up for it. It’s a good game that is challenging but not over whelming. If you get a chance to play this game I’d recommend giving it a shot. In total I’d give this game a 7.4 out of 10.